Sousuke Kagura (神楽奏助 Kagura Sousuke) is one of the supporting characters in ClassicaLoid. He is Kanae Otowa's childhood friend and Pad-kun's owner.

He is a teenage boy with shaggy dark blue hair and blue eyes. His everyday outfit is a long, short-sleeved sweatshirt with a central pocket, long blue trousers with red sneakers, he often puts Pad-kun in his sweatshirt pocket. When he does not wear his usual outfit, it is his school uniform, Pad-kun is then stored in his bag.

When he's not wearing his usual clothes, he wears his school uniform.

He dabbles on DTM composing and guitar playing despite being horrible at it. He appears to be doing these for attention, but there are hints of him genuinely loving music.

He seems to have a good friendship with Mozart. 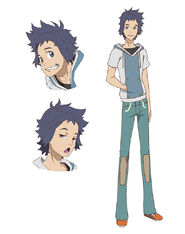 Add a photo to this gallery

Retrieved from "https://classicaloid.fandom.com/wiki/Sousuke_Kagura?oldid=1379"
Community content is available under CC-BY-SA unless otherwise noted.